How Does Alimony Work in a Divorce Settlement? 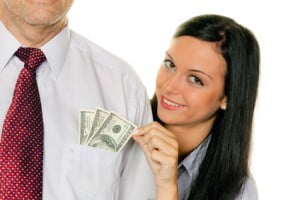 Alimony is something most of us have heard about at some point, but depending upon where you live or grew up, it may be something of which you are not completely familiar. When a divorce settlement occurs, one of the parties may be required to pay a predetermined amount to the second party on a monthly basis. This usually occurs when one spouse earns significantly more than the other or one of the spouse’s stayed at home to take care of the children.

For one party to get alimony in a divorce settlement, he or she must be able to show the court that he or she earned less money than his or her spouse. In addition, the need for financial support must be demonstrated to the court. In most cases, the alimony is paid until the receiving spouse is able to receive educational or skill training to improve his or her earning power. For instance, alimony might be paid while the receiving spouse attends a trade school or pursues a college degree.

In some cases, the receiving spouse is never able to create financial independence and receives alimony until one of the parties is deceased or the receiving party is remarried. Each case is decided on its own merits, as the court may or may not set a definitive time frame for the alimony to cease. However, in virtually all cases, the agreement is reviewed by the court periodically to see if it needs to be adjusted or ceased.

With many factors going into the court’s decision to issue alimony, there is no set formula or amount the court will award. Some of the factors that determine the alimony payment are financial need, income earned, and children. Once these factors are considered, the court will award a percentage of the income of the higher earning spouse.

In recent years, with the workforce becoming more equal and both spouses earning paychecks, alimony awards are becoming less common in divorce settlements. But, there are still spouses, both male and female, that stay at home to take care of the household because the other spouse earns enough to support the home. There are also situations where one spouse will work a lesser paying job to support the other spouse while he or she continues his or her schooling so that eventually, that spouse will earn a higher salary. Situations such as this are always considered when a judge awards alimony settlements.

Alimony is in place to ensure that both parties leave the marriage in an equal financial status. If this was not in place, the stay at home spouse would be left in financial ruin after dedicating his or her life to taking care of the home and children so the other spouse was able to pursue his or her career. In order to ensure a fair settlement, it is best to contact a family law attorney for a consultation right away.